Fractum breaker proves its worth at South African mine

An innovative Fractum rock breaker has now been in operation at a large South African opencast platinum mine for roughly two years and has proved such a success – in a secondary breaking role – that it will soon be joined by two more Fractum machines.

Click on the magazine to read the full story. 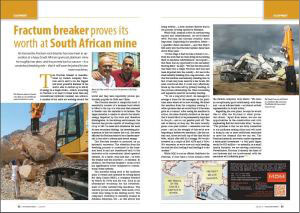